AIA Virginia is pleased to announce the 2019 Awards for Excellence in Architecture. Also known as the Design Awards, these honors celebrate projects no older than seven years that contribute to the built environment and are clear examples of thoughtful, engaging design. Award categories include Architecture, Contextual Design, Historic Preservation, Interior Design, and Residential Design. These 22 projects will be celebrated at the Visions for Architecture gala on Friday, Nov. 8, 2019, at the Hilton Downtown Richmond.  Jury Chair Ann Beha, FAIA, will offer insights from the jury at Architecture Exchange East at 2:45 p.m. on Friday, Nov. 8.

The jury considers aesthetics, adherence to the client wishes, proven and projected building performance, and concept development during its deliberations.

Blue Ridge Orthodontics (Ashville, N.C.)
This project brings an infusion of well-considered craft and good planning into the medical office building type. Light materials convey cleanliness without being institutional and the views to the outdoors convey a sense of tranquility.

Google at 1212 Bordeaux (Sunnyvale, Ca.)
This thoughtfully-planned project is well connected to its compact setting. The materials and bridges help achieve unity and visibility in this highly-collaborative office space.

The Brendan Iribe Center for Computer Science and Engineering (College Park, Md.)
As a campus gateway, this succeeds in place-making. It showcases “the arrival” with a strong, contemporary statement. The interiors are varied and welcoming, legibly emphasizing STEM education.

Elon W. Rhodes Early Learning Center (Harrisonburg, Va.)
The scale is good and the planning is extremely strong. Public circulation is active and the adjacencies and flexibilities will make this a long-term asset to the school system.

Hotels at The Wharf – Canopy by Hilton & Hyatt House (Washington, D.C.)
An Urbanistic success! The simple, slender façade and skillful massing create active, outdoor spaces which are full of life and urban vitality. The podium and geometries are considerate of site, scale, and marketplace conditions.

Howard University Interdisciplinary Research Building (IRB) (Washington, D.C.)
This project makes a strong, simple statement. It is powerful yet restrained in composition with a clear and dynamic street presence.

WTCC Parking Deck 2 (Raleigh, N.C.)
As a parking garage at community college, this really is a good citizen. The cladding and crenellations are good solar control strategies and the views and daylight promote safety and clear wayfinding.

The awards for contextual design are chosen based on outstanding architecture that perceptibly reflects the history, culture, and physical environment of the place in which it stands and that, in turn, contributes to the function, beauty, and meaning of its larger context.

550 East Water Street (Charlottesville, Va.)
This project claims its own identity while still successfully responding to its site between the rail tracks and street. It’s a wonderful example of good urban infill.

Claude Moore Education Complex (Roanoke, Va.)
With its simple streetscape and successful interior kitchen and training facilities, this is architecture that respectfully contributes to the neighborhood’s vibrant history.

Re-Imagining Benefield (Richmond, Va.)
This is a successful representation of how an engaged design team and a participatory community can work together to create a design that reflects a neighborhood’s values while pushing it to be all it can be.

The historic preservation category focuses specifically on excellence in strategies, tactics, and technologies that advance the art, craft, and science of preserving historically significant buildings and sites. The jury takes into consideration adherence to local, state, and national criteria for historic preservation.

Spencer Carriage House Deep Energy Retrofit (Washington, D.C.)
This is a robust example of repurposing that is both sensitive to history and appealing to a contemporary audience. Balancing the client’s net-zero energy goals with responsible historic preservation is well-documented and laudable.

The Cavalier Hotel Rehabilitation (Virginia Beach, Va.)
The design confirms the connection between the hotel and its rich history. Structural solutions are well considered and very innovative.

The Lockkeeper’s House (Washington, D.C.)
The exterior, interior, and landscape are all well executed — it feels like welcoming back a lost treasure.

Interior design projects are judged on mastery of composition, functionality, material and color palettes, and well-integrated adherence to the highest levels of accessibility, health and safety, environmental, and occupant-comfort considerations, standards, and regulations.

Watergate 502 (Washington, D.C.)
This is a reinstatement and enlargement of thoughtful modernism. The curved element, integrated columns, and angularity of the plan are well-handled.

Aesthetic appeal and functionality are two long-established criteria for home design, as are affordability and resource efficiency. The jury looks at each submission in its totality toward meeting those goals.

Chapman Stables Housing (Washington, D.C.)
The design offers hints at the structure’s history, expressing how the building has evolved over time. The massing and site planning are notable.

Mid Century Modern Residence (Bethesda, Md.)
This design respected the form of the original house and amplified it. The new co-exists harmoniously with the original. The composition is clear and the landscape is elegantly integrated.

Mossy Rock (Free Union, Va.)
This simple new construction features clean lines and beautiful use of materials. The scale of the outdoor porch is appealing and well-connected to the landscape.

AUTO-haus (Washington, D.C.)
The spatial properties of the existing condition were optimized to create a courtyard-like feel. The industrial vocabulary was consistent and clever.

Read more about the jury.

About the Awards for Excellence in Architecture

All entries must be the work of architects who have an office in Virginia or are members of AIA Virginia. The location of projects is not restricted, but any built work submitted must have been completed after January 1, 2011. Un-built work was also considered, as long as it was commissioned by a client as opposed to hypothetical work completed in the mode of research or academic training. 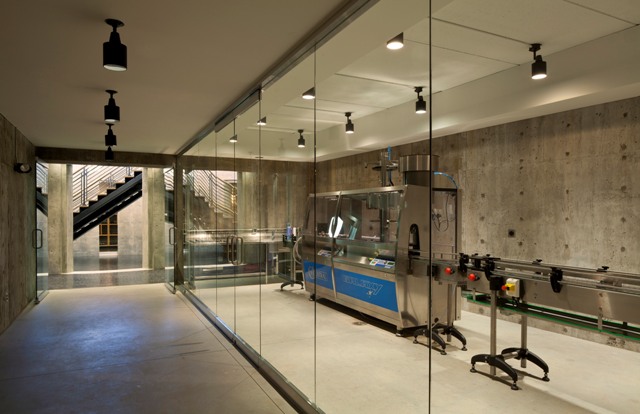 Across five award categories — Architecture, Contextual Design, Historic Preservation, Interior Design, and Residential Design — 29 projects were recognized for design excellence in 2013. Five separate juries identified 16 Honor Awards, 12 Merit Awards, and one special citation from a pool of 139 submissions. The awards recognize the very best work by designers working from Virginia. Held annually, the Awards for Excellence (also known as the Design Awards) celebrate projects no older than seven years that contribute to the built environment as clear examples of thoughtful and engaging design.

In deliberations, the jury—chaired by Thompson E. Penney, FAIA—considered aesthetics, adherence to the client program, proven and projected building performance, and concept development.

The three Architecture Honor Award recipients for 2013 are:

Western Carolina University Health & Human Sciences by Clark Nexsen
“A successful contrast to the natural setting out of which it grows, the building carefully pushes in the hillside contours, preserving a sensitive environment and gracefully stepping down the site,” noted the jury.

RdV Vineyards Winery by Neumann Lewis Buchanan Architects
“The structure is beautifully integrated with its spectacular site,” the jury said. “The interiors are quite bold and very well detailed and executed.

Buckingham County Public School by VMDO
“The masterful stitching together of two outdated mid-century schools into a new elementary school is very sophisticated, yet, at the same time, is very approachable for children,” said the jury.

The awards for contextual design recognize outstanding architecture that perceptibly reflects the history, culture, and physical environment of the place in which it stands and that, in turn, contributes to the function, beauty, and meaning of its larger context.

Holaday Athletic Center, U.S. Air Force Academy by Cannon Design
The project is notable“for its sustainable, contemporary design, which is most respectful of its well-known mid-century surroundings,” stated the jury.

Becherer House by Robert Gurney, FAIA, Architect
The jury noted the exquisite detailing and overall design as the deciding elements in convincing them that this project is relevant to its wooded setting.

Headquarters for Ruppert Nurseries by  Muse Architects
“This complex of new and remodeled buildings respects the 1898 Queen Anne Victorian farmhouse on the site,” said the jury of the nursery’s “overall agrarian character.”

Additionally, the jury recognized The One Nest by McGraw Bagnoli Architects, with a special citation as a clever interpretation of a rural farmhouse related to its countryside site.

Aesthetic appeal and functionality are two long-established criteria for home design as are affordability and resource efficiency. The jury—chaired by 2014 national AIA Custom Residential Architecture Network Chair David Andreozzi, AIA—looked at each submission in its totality toward meeting those goals.

Three of those are by Robert Gurney, FAIA, Architect:

308 Mulberry, which the jury called “absolutely brilliant, a truly spectacular example of a minimally and expertly detailed project that respects the context of a site as well as the history of an existing structure.”

Difficult Run Residence which was called “a remarkable renovation,” by the jury. “Like the rolling landscape, the roof gracefully folds and rolls, thus unifying the house. It is quite an honor to the original architect.”

WISSIOMING2. “The lines of the house form a myriad of squares and volumes,” observed the jury. “Its connection to its vernacular is spellbinding from every direction.”

The jury also honored A Move to the City by Muse Architects. “This project’s exterior skin was restored from the last century, and its interior is transformed for the next century.”

The jury recognized Ocean Walk, by Studio Twenty-Seven Architecture, with a Merit Award.

The historic preservation category focuses specifically on excellence in strategies, tactics, and technologies that advance the art, craft, and science of preserving historically significant buildings and sites. The jury took into consideration adherence to local, state, and national criteria for historic preservation.

The Historic Preservation jury—chaired by Associate Dean of the College of Fine and Applied Arts at the University of Illinois, Urbana-Champaign Gaines B. Hall, FAIA—recognized one with an Honor Award.

For the Honor Award, the jury recognized the National Academy of Sciences restoration by Quinn Evans Architects, which they called “beautifully executed. It followed the best of preservation practice in an exemplary way. This is a first-rate renovation of a landmark building.”

The State Theatre Restoration by Hanbury Evans Wright Vlattas, and

Interior design project of distinction evince mastery of composition, functionality, material and color palettes, and well-integrated adherence to the highest levels of accessibility, health and safety, environmental, and occupant-comfort considerations, standards, and regulations.

Lorber Tarler Residence, with its “clean palette of materials, finishes, and colors as well as the specific role the stair plays in organizing space and bringing in natural light.

Watergate Apartment, as “a clever use of geometry to achieve a better integration for what otherwise would feel like a small apartment. This space honors the legacy of Moretti’s 1960s masterpiece.”

5110-½ Offices, was lauded by the jury for how it draws light “into the deepest parts of the office. The organization in plan is warm, clean, and professionally formal.”

The jury also recognized the North Avenue Dining Hall at Georgia Tech by Hanbury Evans Wright Vlattas for “the way the project establishes a relationship between interior and exterior and between existing and new.

The Allsteel Showroom by Hickok Cole for its “sensitive integration of brand into physical space. The relationship between different ceilings, floorings, and lighting achieves an unmistakable identity and character.”