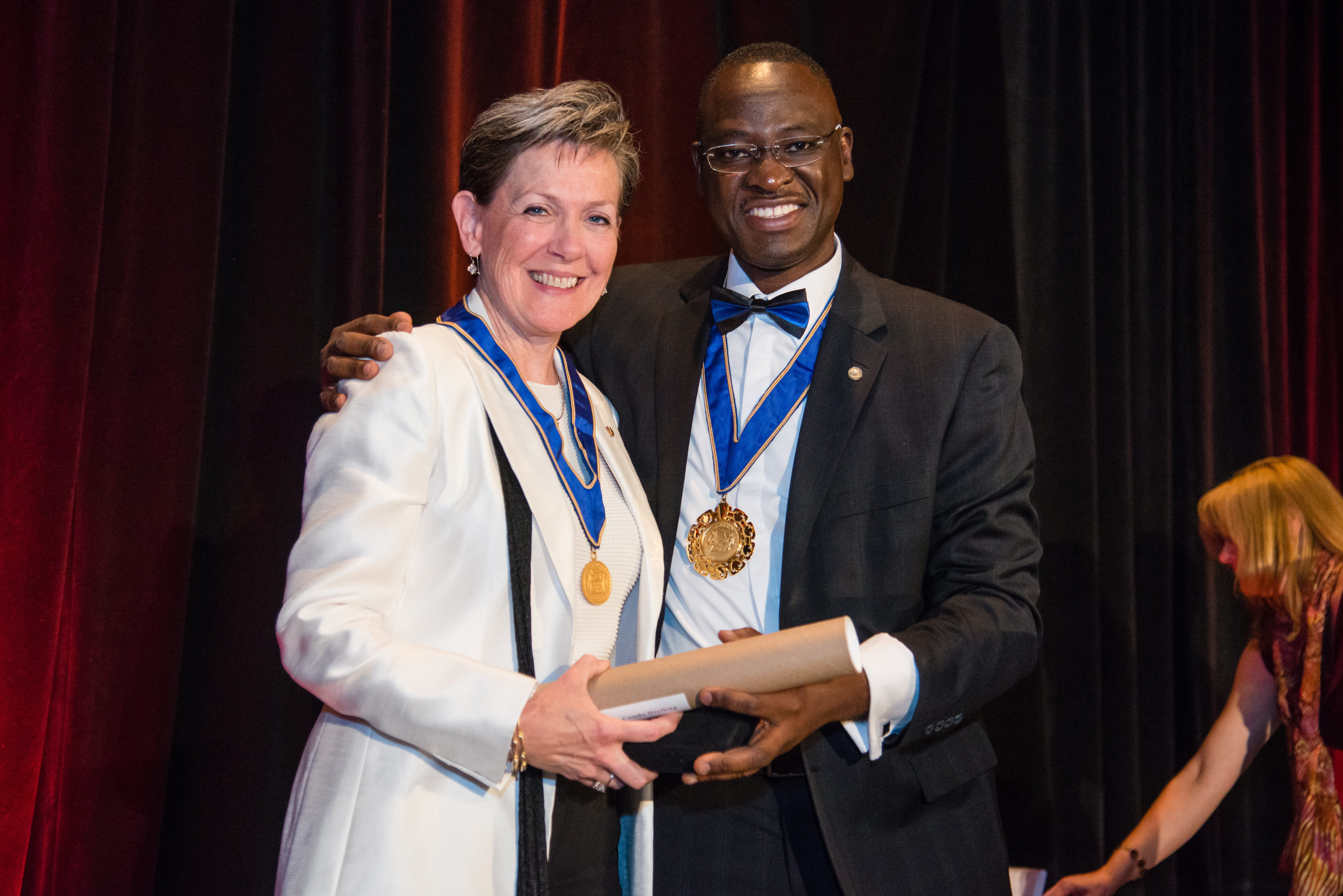 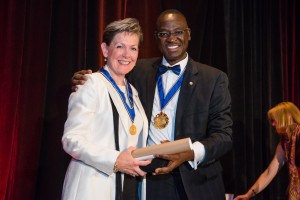 On June 5, 2015, Helene Combs Dreiling, FAIA received the Presidential Medal from the Royal Architectural Institute of Canada during their 2015 Festival of Architecture.  It was conveyed by RAIC President Samuel Oghale Oboh, FRAIC.  Helene is also now an Honorary Member of the RAIC.  The medal, certificate, and honor recognize her leadership of the profession on a global scale, and particularly celebrate the strong neighborly alliance shared by the AIA and the RAIC as professional societies for architects.

On June 6, 2014, the Board of Directors unanimously accepted the recommendation of the Search Committee to appoint Helene Combs Dreiling, FAIA, to the position of Executive Vice President/CEO of the Virginia Society of the American Institute of Architects upon the retirement of the current EVP John Braymer, Ph. D., Hon. AIA, at the end of the year. Her contract was signed during the Sept. 17 meeting of the Board of Directors on the Society’s centennial anniversary.

“The Virginia Society AIA has a history of developing responsive and innovative programs for its members and the profession,” says Dreiling. “I look forward to continuing that legacy of leadership, with a focus on enriching the member experience while elevating awareness of architects and architecture.”

Dreiling — who is an accomplished architect and Fellow of the AIA — has followed a career path largely beyond the bounds of traditional architectural practice. She has worked in several not-for-profit settings including The Colonial Williamsburg Foundation, and as a staff Vice President for The American Institute of Architects in Washington, D.C.

Her service to the profession is significant and remarkable. She is a past president of AIA Blue Ridge and recipient of their Award for Distinguished Service. Dreiling is also a Virginia Society AIA past president, a Noland Medalist, and Distinguished Achievement Award recipient. Her service at the national level includes 2014 President; Past 1st VP, Secretary, VP, and Regional Director. She currently serves as the Executive Director of the Virginia Center for Architecture, a position she will continue to hold.

Throughout her AIA experience, Dreiling visited dozens of AIA local and state components, facilitating member town hall meetings, helping to resolve challenges, and assisting in the restructuring of numerous Component Boards. This work gave her deep insight into the strengths and weaknesses of a wide range of AIA Components.

Her professional background and volunteer service provide her with substantial non-profit management experience, uniquely suited to the role of EVP/CEO of the Society. 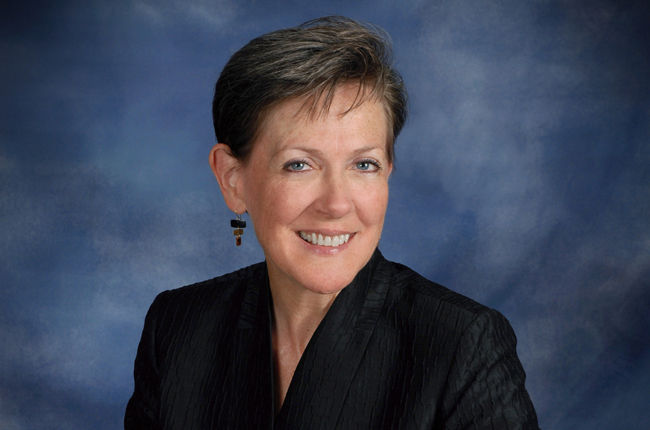 Helene Combs Dreiling, FAIA, has been selected to receive the Society’s highest honor bestowed upon an architect — the William C. Noland Medal. She will be recognized during the Annual Meeting of the Membership at Architecture Exchange East on Thursday, Nov. 8, 2012, at 1 p.m. in room E11b. The Medal will be presented at the Visions for Architecture gala on Friday, Nov. 9, at the Hotel John Marshall.

The award recognizes a lifetime of achievement for an individual architect. Her work to advance the profession, nurture emerging professionals, and elevate public awareness of the contributions architects make to the community, has benefitted thousands of individual architects and firms — not just in Virginia and the United States — but throughout the entire world. “Helene is without a doubt the most influential architect I know,” says colleague Timm Jamieson, FAIA. “She exemplifies what we all want to be in this profession … and we are each the better for [her] service.”

Dreiling has dedicated decades of service and leadership to the American Institute of Architects, culminating in her recent election as First Vice President/President-Elect.  She will serve as President of the AIA in 2014. The road to this position features a series of notable milestones, including her election as the first female president of AIA Blue Ridge and the first female Director of the Region of the Virginias. She was the first woman from AIA Blue Ridge, and youngest member in Virginia, to be elevated to the College of Fellows. These accomplishments serve as a beacon for those who follow in her footsteps. “Helene has done more than just to serve,” say former Institute secretaries Betsey and Brian Dougherty. “She has touched those people and those issues that she is passionate about and dedicated to, and has made each of us a better volunteer and a better professional through her sensitivity, insight and guidance.”

Throughout her service, Dreiling became one of the AIA’s most ardent and respected voices in support of emerging professionals and the benefits of lifelong learning.  Her work on a host of key task forces and committees not only helped streamline the AIA’s Continuing Education System, but also helped lead a shift towards a more seamless transition in education, training, and practice, by redefining the term “intern” and un-bundling the Architecture Registration Examination(ARE).

Her ongoing commitment to educating the broader public about the value of architects and good design began early in her career with her work at the Colonial Williamsburg Foundation. Later, she was singularly responsible for curating Virginia Women in Architecture, a highly acclaimed exhibition spotlighting the work of Virginia’s female architects. This passion for educational outreach continued as she managed the Institute’s AIA150 celebration and oversaw the creation of the nationally-recognized America’s Favorite Architecture exhibition and website.   In her short time as the Executive Director of the Virginia Center for Architecture, she has helped shepherd the Center to a position of financial and programmatic strength. “All members of the profession in Virginia will benefit as the public develops a greater understanding of the power of architecture,” says VCA Trustee Ellen S. Cathy, AIA.

“Helene superbly exemplifies those personal qualities and life-altering achievements for which the Society’s William C. Noland Medal is designed to recognize and celebrate,” said Paul H. Barkley, FAIA. In making this award, the Society recognizes a career-long dedication to her fellow architects and the profession of architecture. 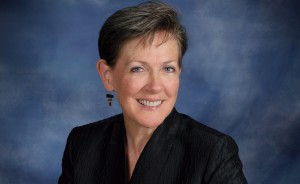 The Virginia Society AIA Awards for Excellence in Architecture and the Society’s Honors Awards were presented at the 2011 Visions for Architecture gala at the Virginia Museum of Fine Arts on Friday, Nov. 4, 2011.