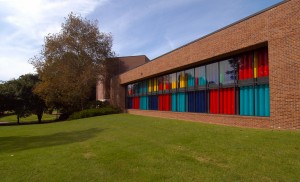 The College of William and Mary’s Muscarelle Museum of Art, designed by Carlton Abbott, FAIA, has been selected to receive the Society’s Test of Time award.

The award recognizes a structure not less than 25 years nor more than 50 years from the date of initial construction; in addition, the project should still carry out the original program in a substantial manner and must be standing as originally designed in appearance and in good condition. The award will be presented at the Visions for Architecture gala on Friday, Nov. 7, 2014, at the Jefferson Hotel.

The Muscarelle Museum of Art was a gift to The College of William & Mary from alumni and friends. Completed in 1983, the building’s most notable feature is the ingenious trombe wall, which incorporates monumental tubes filled with colored water. The colors are changed several times a year, as the wall serves double-duty in transforming the south façade of the Museum into a dramatic and innovative work of art, while also functioning as a solar energy collection system.

In making this award, the selection committee noted the contemporary design as “cutting-edge” and “remarkable for the time in which it was built.” With its own permanent collection of more than 4,000 works of art and an impressive schedule of traveling exhibitions, the Society also recognizes the success of the building in fostering the full integration of a dynamic art museum into the life and liberal arts mission of the College, as well as the surrounding community.