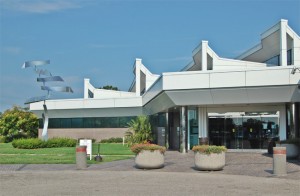 Virginia Beach’s Meyera E. Oberndorf Central Library, designed by the late Laszlo Aranyi, founder of The Design Collaborative, has been selected to receive the Society’s Test of Time award. The design team included Richard Fitts, project architect, and W. Ray Jennings, interior design, who also designed the library’s recent renovation in 2005. The award recognizes a structure that is no less than 25 years old. While building use may change over time, the overall design must be cherished as a significant contribution to the community and the built environment. The award will be presented at the Visions for Architecture gala on Friday, Nov. 9, 2012, at the Hotel John Marshall.

Envisioned as an energy-efficient, day-lit facility, the library is an early example of the emerging practice of sustainable design. Energy-saving strategies played a major role in determining the siting, form and appearance of the library. The plan is elongated on the east-west axis to allow for the collection of natural daylight through the south facing windows, while suspended acoustical baffles reduce glare. Roof overhangs, which shade the windows during the hot summer months, work in conjunction with the white roof and green-tinted glass to reduce the cooling load.

In addition to many forward-thinking sustainable features, the library was designed to be highly adaptable. Under-floor raceways provide for power and data connectivity to within 30 inches of any location, allowing the library to accommodate demand for internet access in the years after opening. With wider aisles, self-lighted shelves, and systems furniture (rather than traditional library furniture), spaces are easily reconfigured to adapt to changing needs.

Called the “best new building, hands-down” by a local paper during its opening year, the iconic library continues to be a state-of-the-art facility as well as a popular destination in the region.