Grab your favorite beverage and join your fellow preservation professionals to swap stories about your weirdest, wildest, or most surprising project. Prefer to remain anonymous? No problem! Submit your story in advance and our hosts will tell it on your behalf.

If you’ve worked in historic preservation, you’ve come across some pretty weird and wonderful stuff. To kick off the re-constitution of Virginia’s Historic Resources Committee, we’re hosting a social event on Thursday, Dec. 3 at 4 p.m. Got an unusual case study? A fascinating discovery? A horror story? Let’s hear ‘em!

Join us to hear strange but true tales from the world of historic preservation and get to know some of your preservation colleagues from around Virginia.

A group of members in the historic preservation community are reinvigorating Virginia’s Historic Resources Committee (VHRC). If you’re interested in serving on a steering committee which will help envision and plan programming, let us know.

The mission of the VHRC is to identify, understand, and preserve architectural heritage within the Commonwealth of Virginia. VHRC is engaged in promoting the role of historic preservation, rehabilitation, and adaptive use within the profession through the development of information and knowledge among members, allied professional organizations, and the public.

The Virginia Historic Resources Committee (HRC) kicks off 2014 with a luncheon and a tour on Jan. 16, 2014, at the Virginia Center for Architecture beginning at noon.

The mission of the Virginia HRC is to identify, understand, and preserve Virginia’s rich architectural heritage. HRC is engaged in promoting the role of the historic architect within the profession through the development of information and knowledge among members, allied professional organizations, and the public.

Members of the HRC invite all those interested in historic preservation to join them as they discuss the program of events for the Society’s centennial year. The $15 fee covers lunch.

Founding member of Virginia Interfaith Forum on Religion, Art and Architect (Va. IFRAA) William Robson, AIA, is seeking professionals and students to field measure and document a historic church building that is nearing a point of collapse. It would be an effort to capture in drawings and photographs an historic Virginia church — and perhaps even reverse the course of decay by building  public awareness. Robson hopes to also create a written narrative outlining the back-story of the building and its place in the local history. He noted that members of Va. IFRAA and the Virginia Historic Resources Committee (Va. HRC) might be particularly interested in participating.

The church, on Route 522 in Culpeper County, is known locally as “The Winston Family Chapel.”  The brownstone chapel, built around 1908, has been unused for many years and is falling into disrepair.  An inquiry with local residents revealed a compelling story of human drama. The chapel was constructed around 1908 by the patriarch of the Winston family, who apparently was quite wealthy. His will allocated the ownership, care, and maintenance of the chapel to the Winston family decedents. As the locals tell the story, the Winstons were at odds with another local family, the Somervilles. The Somervilles constructed their own church in a place called Mitchels, also in Culpeper County (and apparently still standing today).

As time went on, the families remained at odds, with the exception of two young lovers who, as you may have guessed, ended up getting married, linking the two families. As time passed, the Winston family members have all passed away, and through inheritance, all assets (including the chapel) ended up in the hands of the Somerville family. As Paul Harvey said “the rest of the story” is evident.

There is one remaining descendent, who is a Somerville.

Robson hopes to gather a team to implement this project and potentially present the results at Architecture Exchange East or another suitable venue.  When this team has been assembled, one of the first tasks will be to approach the remaining Somerville family member to request permission to undertake the documentation.  The potential exists for generating considerable local enthusiasm and goodwill, based on initial inquiries. 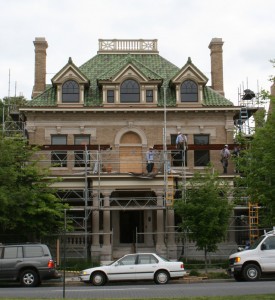 In addition to the April 4 tour of Thomas Jefferson’s Poplar Forest, the Virginia Historic Resources Committee announces another event to what is quickly becoming a rich package of programming developed by the committee.   Here’s more about this event:

Situated in a former electric railway car barn, Dovetail Construction renovated the space built in 1907 in the heart of Richmond for their offices.  The building is listed on the National Register of Historic Places, certified LEED platinum, and a net zero energy commercial office

Following a visit to the Dovetail offices, the HRC has been invited to a private tour of 2710 Monument Avenue.  The historic 1914 mansion is undergoing a significant renovation and restoration.  The owners, Paul and Julie Weissend (who also own Dovetail Construction), are blogging about the process at www.monumentalrenovation.com.

Adaptive Reuse in the Old Dominion (and Beyond)