As Architect for the University of Virginia, Alice Raucher is the symbolic custodian of Thomas Jefferson’s design legacy, directing the architecture, planning, and landscape design of the University’s Grounds. In addition to being the chief steward of the UNESCO World Heritage site of Jefferson’s original college, Alice oversees a dynamic and expanding campus embedded in the City of Charlottesville and surrounded by Albemarle County, and navigates a complex and highly political landscape as a true collaborator and team builder. Alice heads an office of 15 professionals who take an integrated design approach to University projects. She and her team have responsibility over the University’s 2,700 acres and 18.5 million square feet, and influence its $3 billion capital budget. In her previous role as Senior Architect and Chair of the Design Steering Team at Yale University, Alice oversaw the largest expansion of the college in a generation, as well as the renovation of two of the most iconic masterpieces of modern architecture. At Yale, and now at UVA, Alice is a strong advocate for design excellence, accessibility, resilience, equity, and sustainability.

As a tenure-track faculty member at Syracuse University’s School of Architecture, Alice shared her skill and love for the profession with a new generation of aspiring architects. She was appointed as Director of Syracuse’s Florence Program, where, in addition to her teaching load, she oversaw the school’s undergraduate, graduate, and pre-architecture programs. Alice served as editor of “Foglio” magazine, and was an organizer of the collaborative workshop “La Construzione della Continuita” between Syracuse and the Universita di Ferrara. In addition, she has lectured widely on topics ranging from urbanism to historic interiors. As an AIA member, Alice has served on award juries and contributed to regional and national conferences. She is also active in the Association of University Architects, where she presented her work to an international audience in 2019.

Alice has devoted a large portion of her thirty-four-year career to the practice of architecture, gaining responsibility while being entrusted with increasingly significant projects. As a young architect, Alice joined James Polshek’s New York office, where she oversaw the expansion of Carnegie Hall, a project she considers formative in her career. As a partner in Bell Larson Raucher Architects, Alice was cited in The New York Times article “The Delicate Matter of Passing the Torch” as the next generation carrying on the tradition of a great firm (McKim, Mead and White). Her appreciation for the craft of architecture, respect for her fellow practitioners, and desire to mentor young professionals have informed Alice’s supportive and collaborative approach to working as a University Architect.

Where did you go to college?
I have a B.A. in Fine Art/Art History from Queens College, City University of New York, and an M.Arch. from Syracuse University

What does it take to be an architect?
Passion and perseverance!

Was there an architect that particularly inspired you?
Very difficult question to answer, and I would say that I am inspired, usually, by the work rather than by the person. I am inspired by the work of Eero Saarinen, Alvar Aalto, and Eliel Saarinen, especially.

What are you currently reading?
Sadly, mostly my e-mails these days, but watching escapist tv and movies for the ten minutes before I fall asleep!

What’s the best meal you’ve ever had?
Another very difficult question to answer! One that ranks very highly is the “traditional” Thanksgiving dinner we hosted for our students who were studying abroad in Florence, Italy, thanks to Trattoria La Carabaccia. I’ll never forget the fileted roast turkey (“it’s not supposed to be boneless!”), and the sweet potato torta.

Why do you volunteer with AIA?
The AIA connects me with peers, near and far, from varied backgrounds, experiences, and generations. It is an opportunity to share my experiences as well as learn from others.

The AIA Fellows of Virginia is proud to announce the formation of the Helene Combs Dreiling Annual Scholarship to honor its namesake, now serving as AIA Virginia Executive Director/CEO, for her generous contributions to the profession.

“Our goal is to benefit future leaders in the field of architecture. This scholarship fund will give young architects opportunities such as access to AIA Convention Fellowships, a professional development City Summer and mentoring programs,” says VCU University Architect Mary Patton Cox, FAIA. “Throughout her career, Helene has championed the needs of emerging professional architects and advocated on their behalf, not just in her current role, but also as president of AIA Blue Ridge, president of AIA Virginia, Regional Director for the Virginias, staff vice president of the American Institute of Architects and as national president of the American Institute of Architects. Helene, herself, was elevated to fellowship in 2000.”

So far, the AIA Fellows of Virginia have raised more than half of the total endowment goal and are continuing to accept donations. They expect the scholarship to be fully endowed by the end of next year so that scholarships can be available in 2017. The Helene Combs Dreiling Annual Scholarship will be awarded to students, interns and young professionals up to 10 years after receiving their accredited degree.

To donate by check:


To donate by credit card:

1. Notify Keesha Ezell of the date of the transfer
2. Give the following information to your financial planner or broker:
Virginia Foundation for Architecture – Helene Combs Dreiling FAIA Endowed Scholarship Fund
DTC  0715
Acct: 1170-9400

Two Virginia members, Sanford Bond, FAIA, and Valerie Hassett, FAIA, were awarded membership in the College of Fellows in 2014.

The Jury of Fellows met at Institute headquarters from Jan. 25-29, 2014, and selected 139 new Fellows. The Fellowship program was developed to elevate those architects who have made a significant contribution to architecture and society and who have achieved a standard of excellence in the profession. Election to fellowship not only recognizes the achievements of architects as individuals, but also their significant contribution to architecture and society on a national level. Out of a total AIA membership of over 83,000, there are just over 3,100 distinguished with the honor of fellowship and honorary fellowship. 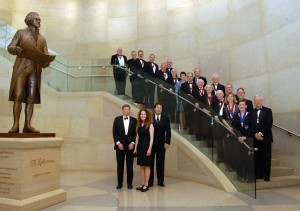 Robert W. Moje, FAIA, Elizabeth A. Reader, FAIA and Alan L Hansen, FAIA, (center foreground) newly elected Fellows of the American Institute of Architects, were honored by their Region of the Virginias colleagues at the 2013 Fellows Fête held in the Virginia State Capitol on Richmond, March 23, 2013