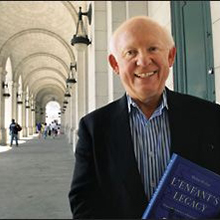 Michael Bednar, FAIA, has been selected to curate an upcoming exhibition at the Virginia Center for Architecture. Scheduled to open in April 2013, the juried exhibition will feature fine art by architects, and will showcase the range of artistic talent in Virginia’s architecture community. Individuals with a degree in architecture will be invited to submit their work for consideration.

Bednar, a professor emeritus at the University of Virginia, is an artist in his own right. He works primarily in abstract steel sculpture, focusing on architectonic geometry and spatial relationships. The call for submission for the Art by Architects exhibition at the Virginia Center for Architecture is expected this fall.

Michael Bednar has been a faculty member in the Department of Architecture since 1972 with a primary teaching role in design studios at all undergraduate levels. He also teaches courses in urban design, lighting design and design of pedestrian places. Mr. Bednar served as Co-chairman of the Department of Architecture for six years, as Associate Dean for Academics of the School of Architecture for three and one half years, Acting Associate Dean for Students for one semester and is currently Director of Undergraduate Architecture Advising. Prior to joining the faculty at UVa, Bednar conducted funded research and taught at Rensselaer Polytechnic Institute. His research has resulted in the publication of numerous articles, reports and four books: Barrier-Free Environments, Interior Pedestrian Places, The New Atrium and L’Enfant’s Legacy. The New Atrium was named Architectural Book of the Year by the American Association of Publishers in 1986. L’Enfant’s Legacy was named an outstanding academic title for 2006 by the American Library Association.

Bednar was a member of the Charlottesville City Planning Commission for eight years (three years as chair) during which time the city created and adopted an urban design plan. He is on the board of directors of Habitat for Humanity of Greater Charlottesville and was design director of the 2006 builders’ blitz project.

Michael Bednar has practiced architecture with I. M. Pei and Partners and Geddes Brecher Qualls and Cunningham. Since 1972, he has had his own practice in Charlottesville (currently Bednar Lawson Architects) with the design and construction of over fifty residential, commercial and institutional projects.  A recent project is the preservation of the John A. G. Davis House (1826), built by Jefferson’s workmen. This project received awards from the Association for the Preservation of Virginia Antiquities, the City of Charlottesville and the Preservation Alliance of Virginia. Recent work includes large scale sculpture exhibited in Washington, D.C., Portsmouth, VA and Charlottesville, Va. In 1990, he was elected to the AIA College of Fellows. In 1997, he received the Community Service Award from the AIA Central Virginia and the Distinguished Achievement Award from the Virginia Society AIA.

Drainage + Drying in the Exterior Wall