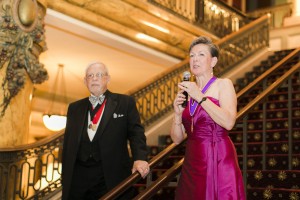 In last month’s VSAIA News, John Braymer shared a farewell message with everyone as he drew closer to the final days of his 28-year tenure as our Executive Vice President.  This month, I find myself having taken on the role and responsibility of his former position.  I considered offering you my own dreams for our statewide professional society under my just-getting-started stewardship.  However, I decided that for this newsletter issue, I would instead like to reflect on John, offering my perspective of his time with us and extending our collective appreciation for his dedication to us.  (Next time, I’ll gaze into the crystal ball of the future …)

Thanks to his devoted leadership, the architects of Virginia are the fortunate beneficiaries of an enhanced level of support and service.  Thanks to his exemplary stewardship, an architectural treasure has been preserved and enhanced.  Thanks to his extraordinary vision, the public has a greater understanding of the power of architecture to transform lives, as well as a deeper appreciation for the value architects bring to their communities.

Notable English architect, planner, landscape architect, and garden designer Sir Geoffrey Jellicoe once said, “Architecture is to make us know and remember who we are.”  Whenever we think about the impressive programs, projects, and initiatives that are the ‘architecture’ of the Virginia Society, our reflections will take us, most often, to John as their steward.  Whenever any of us visit the Virginia Center for Architecture and study its impressive edifice, our thoughts will lead us to John as its restorer.  The architecture of our beloved organization – and of that special place – will not only “make us know and remember” who WE are, but will remind us of who HE is … along with what he stood for and the difference he made for our profession and in the Commonwealth.

We’re appreciative of his countless gifts to us and for his legacy, which will carry on into future decades.  We hope that John will often reflect – in his own way – on his many successes, contributions, and accomplishments.  Our congratulations and thanks!

The Virginia Society’s 2014 program year has all but ended. New officers have been installed; some staff re-tooling has been accomplished; and 2015 dues payments have started to arrive.

It is also time for me to say my last official farewells to our membership. Over my 28+ years as the Society’s executive officer our membership has almost doubled. And nearly three decades provides a pretty ample scope for shaping an organization to respond to aspirations that always will, as they should, exceed our grasp.

In the broadest sense, the past decades have been about building an organization that could use its membership strength to create increasing impact for the profession. The Society’s raison d’être has always been about creating a sense of unity to reinforce professional action on many fronts.

Like recently reiterated purposes of the national AIA, the Society has focused during my tenure on three areas of action: Government Advocacy; Professional Excellence; and Public Engagement. From a full-time government affairs program that ranges from legislative engagement to the Citizen Architect program—designed to carry the architect’s influence onto as many public boards across the Commonwealth as feasible—the Society has provided the vehicle for you to engage in Virginia’s governing processes. ArchEx, and BUILDING VIRGINIA before it, has responded for 27 years to the profession’s growing awareness that things change fast and the profession must embrace lifelong learning as a survival technique like never before.

Third, in the mid-1980s, Virginia Foundation for Architecture officers (themselves Society past presidents) realized that the Foundation had a potential to help the profession talk to the public far beyond its original scholarship mission. As soon as the renovation of the Foundation/Society’s Barret House headquarters was complete and the series of public architectural exhibitions was launched, the need for a full-blown non-collecting museum of architecture became evident, with exhibitions, school programs, summer camps, lectures, travel programs, and a bookshop. The 1993 seeds of the new Virginia Center for Architecture finally sprouted with the April 1, 2005, opening of the VCA at the Branch House on Monument Avenue.

Providing the executive leadership of the Virginia Society AIA and the Virginia Center for Architecture for many years has been a fine way to bear witness professionally to the deep satisfaction that architecture has provided me from a very early age. My retirement parties are over now, and I can hand over the keys to my successor, Helene Dreiling, FAIA, secure that the work of so many people over so many years is in safe hands.

The future for the architecture profession will be no easier than the past has been. But with any luck, I am confident that architects, a small profession in number, will find new ways to strengthen their unity of purpose as embodied in the Virginia Society AIA.