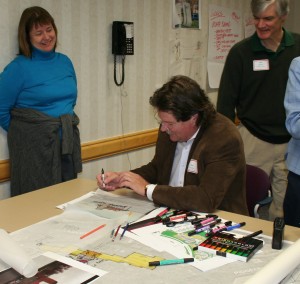 A decade has passed since it began operating and Loudoun County is all the better for it.  “It” is the Loudoun County Design Cabinet, the brainchild of Alan Hansen AIA.

For its contributions, the Design Cabinet — and Hansen specifically — was recognized and commended in December by the Loudoun County Board of Supervisors with a resolution of commendation.  In part, the supervisors commended the Cabinet for providing thousands of hours of service during which it gave “professional consultation, advice and conceptual plans to improve the communities throughout Loudoun County” that contributed “towards making Loudoun a community of highest quality design.”

When Hansen brought the idea to the county’s then-Director of Economic Development Larry Rosenstrauch, the brainchild became a full-fledged program with enthusiastic county support.  Since 2003, the cabinet has performed 25 charrettes — intensive design studies compressed into a few hours — for local residents and business owners seeking design advice.

“It’s what we’ve been about for years; great communities don’t just happen,” said Design Cabinet Chairman Hansen of DBI Architects. “Skilled design professionals, preferably stakeholders, need to take the time to understand what a community wants to be ‘when it grows up’ and stay out in front of the continuous but changing economic pressures. 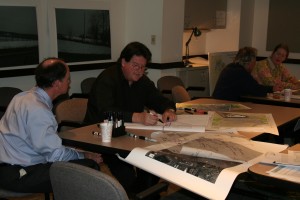 “Loudoun is an exceptional community for business and for living, in part because of the emphasis on and attention to, design excellence. We’re fortunate that the leadership of Loudoun County Government understood this a decade ago when we were founded, and we appreciate their continued support today.”

These charrettes often take a full morning or evening, beginning with an introduction to the process and the now 13 professionals who volunteer their time to the community.  The introduction includes a brief synopsis of what the issue of the day is.

Once the introductions are over, local residents, community leaders, and business owners break up into groups and work with two or three of the professionals:  architects, professional engineers, planners, and landscape architects.  Often working together for the first time, the people in each group produce a different scenario of how the area under consideration can be molded sensitively through good design.

Some of the concepts developed have addressed using design to enhance community business corridors in Loudoun’s towns, creating a community skate park in Purcellville, and improving complex traffic issues in eastern Loudoun developments.

In addition to the design charrettes, the Cabinet initiated the Signatures of Loudoun Design Excellence awards program in 2005.  During its tenure, the Cabinet has recognized 83 of Loudoun’s commercial, residential, public and private structures and design features using a public nomination process.

More information on the Design Cabinet is available online at biz.loudoun.gov/designcabinet.